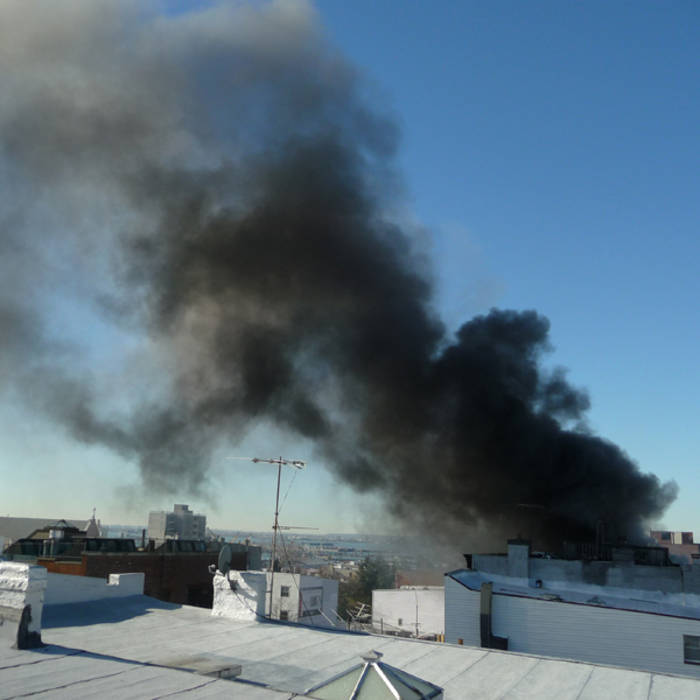 This sound art piece is half of a two-part ode to Batman, the cat belonging to Open Source Gallery. Open Source's former building was destroyed in an accidental fire which occurred on November 12, 2010, just a few doors down from my studio. Disoriented, Batman - a black and white tomcat who'd been king of the block - disappeared for a few days.

An article appeared in the Science Times that day with new information on how cats lap. Part of it was woven into this piece.

I spent most of the day working away in my studio, absorbed in my research and projects and not fully realizing the gravity of the situation down the block, in the real world just beyond my window. (The 3-alarm fire took about 10 hours to put out.)

The second part of the ode - a video piece based on footage of the fire which I recorded from my roof - can be watched at vimeo.com/sarabouchard/holy-smoke-batman.

"Holy Smoke, Batman!" Parts 1 and 2 were installed in Open Source's exhibition "Associated," which took place in April, 2011, throughout an adjacent building that had been damaged by the fire.

From the NY Times article "Cats Lap With Just Tip of the Tongue, Engineers Find" by Nicholas Wade:

"What happens is that the cat darts its tongue, curving the upper side downward so that the tip lightly touches the surface of the water. The tongue is then pulled upward at high speed, drawing a column of water behind it.

Just at the moment that gravity finally overcomes the rush of the water and starts to pull the column down — snap! The cat’s jaws have closed over the jet of water and swallowed it."